The Managing Director attended the start of the Guinness World Record attempt at ‘walking backwards’ from John O’Groats to Land’s End. 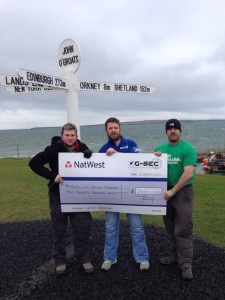 Unfortunately the start was postponed for 24 hours due to severe weather conditions. Jim made donations to both Macmillan Cancer Support and Help Our Wounded Royal Marines and Supporting Arms. Jim struggled in 100 mph winds to have a photograph taken presenting a cheque to both Ric and Greg. Here’s what the MD had to say:

Well the journey up north and into Scotland started okay and looked to be well on schedule with just a little rain on the way to Glasgow.

Unfortunately as we joined the A9 to Inverness the weather changed dramatically which slowed down progress. We was experiencing heavy snow fall and gale force winds, the blizzard conditions reduced our average speed to just 25 mph. As the estimated time of arrival started to increase on the Sat Nav we started to panic as it crept past the start time of 0800 Hrs.

We were supposed to have arrived in John O’Groats at 0600 Hrs and at 0800 Hrs we were just arriving at Inverness with still a fair distance to go, limited phone signal in the area meant we couldn’t contact Ric to see if he and Greg had already set off on their challenge.

By this time tiredness was a real problem, I knew I had to pull over and have a quick nap but I didn’t want to let the lads down.

Eventually we arrived at John O’Groats and was greeted by Ric who informed us that he and the team had only recently arrived themselves due to the weather and had been travelling most of the previous day, needless to say everybody was extremely tired and in no fit state to start the challenge just yet.

After a couple of coffees we decided to attempt to get the photographs done, but freezing cold with 100 mph winds this proved difficult, very difficult!! As you can see the pictures weren’t great but were the best we could do considering the conditions, it took three of us just to keep hold of the cheque.

Needless to say the challenge started the following day albeit in some pretty terrible weather.

I wish Ric and Greg all the best with their challenge and look forward to being at Land’s End in a few weeks’ time, and hopefully a little warmer than John O’Groats.

You can follow Ric and Greg’s progress via the following links;

© G-Sec (Northern) Ltd, all rights reserved. Website by Something Digital.